Emma is a professional and accomplished Soprano, who would be a perfect soloist for any choral or orchestral concert. Her repertoire is wide-ranging and she is able to learn new music quickly. She has an impressive range and possesses an ability to produce a variety of vocal colours.

Emma has studied singing under Kate Cook (BBC Singers), Lesley-Jane Rogers (BBC Singers), Kate Wolveridge (WNO) and Karen Silverwood. She has also taken part in masterclasses whilst specialising in Vocal Performance at Bristol University, where she received a First for her final performance which featured the premiere of contemporary composer Raymond Warren’s song cycle: Another Spring. 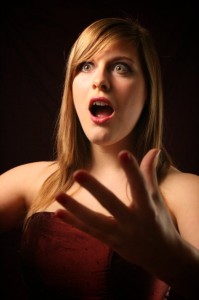 An exciting and talented performer, Emma offers a dramatic and thrilling experience which will delight any audience. She is skilled in constructing varied programmes and is willing to work with the conductor to suggest appropriate pieces to perform which compliments the choir or orchestra’s programme.

Emma is reliable, punctual and has a friendly and approchable manner, along with a professional work ethic.

Please contact Emma for a quote and for more information about her work.