Emma Trounson is a professional choral conductor, soprano, and vocal coach. She also plays and teaches the viola and the violin and offers choral conducting tuition.

Born in Leicester in 1988 and growing up in Kirby Muxloe, Leicestershire, Emma took an interest in Music from a very young age. She participated in the Chanterelles Girls Choir (later the Arts in Education Youth Choir) and the Leicestershire Schools Symphony Orchestra among other local youth ensembles. She attended Kirby Muxloe Primary School, Brookvale High School and Groby Community College. 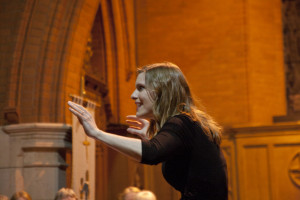 Emma read for a BA(hons) in Music and French at the University of Bristol and graduated in 2010. She held the conductorship of the Bristol University Chamber Choir in her final year, touring with them to the Czech Republic and performing in St George’s Concert Hall in Bristol with the Chamber Orchestra. She also conducted the Galenicals Chamber Orchestra in her second year, sang in the Bristol University Singers and Madrigal Ensemble and played Viola in the Symphony, Chamber and String Orchestras. She took part in the Opera Society productions and was Chamber Music Co-ordinator for the Music Society.

During her Erasmus year she studied Performing Arts at Bordeaux University and served as an international intern at the Bordeaux Conservatoire in the junior choral department, meanwhile assisting the director of the Jeune Academie Vocale d’Aquitaine. She also sang in the Ensemble Vocale d’Aquitaine and played viola in the Bordeaux University Orchestra and Chamber Music ensembles.

In 2012, Emma graduated from the Royal Welsh College of Music and Drama with an MA in Choral Conducting. She studied with Neil Ferris, Simon Halsey, Adrian Partington and Sarah Tenant-Flowers. She participated in masterclasses with Eric Whitacre, Peter Broadbent, Alice Farnham, Karen Grylls and Robert Dean, and took a community outreach module with Lucy Griffiths. She was also appointed the Chorusmaster of the RWCMD Opera Chorus in her final year. Since graduating she was an Assistant Conductor at the Worcester International Festival for Young Singers and has taken part in an advanced masterclass with Paul Brough (conductor of the BBC Singers) during an ABCD conference. 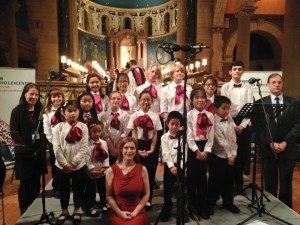 Cathedral choirs, often having the opportunity to conduct Cathedral services.

In 2019 she was appointed Director of Mission through Music at All Saints with Holy Trinity Parish Church, Loughborough where she had already been Director of the children’s choir through her work with DioSing! since 2010. Her role includes directing not only the children’s choir, but also the robed SATB choir and the All-age Music Group. Her work also includes musical outreach in the local community and Emma works with local schools and other organisations as well as running open workshops in the church. She started the singing group ‘SoundBites’ at the Falcon Drop-in Centre for homeless and socially isolated members of the local community. 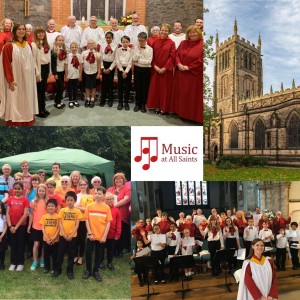 Emma is currently the Choir Director for SoundCafe which is a charity for homeless and vulnerably housed people in Leicester – the choir meets once a week in the Cathedral. For more info on SoundCafe, please visit their website: https://soundcafe.org.uk/ 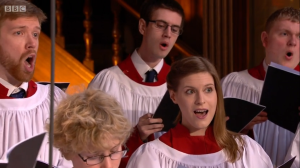 In addition to her commitments as a Choral Director, Emma enjoys solo singing as a Soprano. She appeared as the soprano soloist in Schubert’s ‘Mass in G’ for Leicester Cathedral’s Easter morning service which was broadcast live on BBC 1 in 2014. She is the soloist for the carol ‘O Holy Night’ at the BBC Radio Leicester Carol Service which was broadcast on Christmas Day annually since 2014 and has conducted the massed choir for ‘Sing Christmas’ a popular annual programme broadcast live on BBC Radio Leicester in 2014, 2015 and 2018. She also sang as part of the Cathedral Choir for the Richard III’s Reinterment services at Leicester Cathedral in March 2015 which were broadcast live on Channel 4. She has also appeared as a soloist with many choirs and orchestras in works such as Handel – Messiah, Faure – Requiem, Durufle – Requiem, Schuberts – Der Rose Pilgerfahrt and conducted major works such as Mozart – Requiem, Vivaldi – Gloria, Schumann – Requiem, Beethoven – Mass in C, Haydn – Little Organ Mass, Handel – Messiah and Faure – Requiem. Emma has performed numerous recitals, many times at Leicester Cathedral, mostly notably a full length ‘Moonlight Concert’ beneath an enormous art installation scale replica of the moon, accompanied by Josephine Markham (piano) and Mark Trounson (Double Bass). 2019 saw the release of an album of song cycles by Simon Mold which featured Emma singing the solo song cycle ‘In Memoriam’ accompanied by David Cowen. The CD is available to purchase here: https://www.prestomusic.com/classical/products/8767644–simon-mold-song-cycles 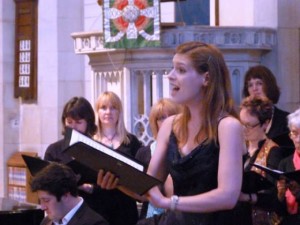 In addition to her numerous and varied solo opportunities Emma also enjoys ensemble singing. She sings in the ‘Leicester Cathedral Chamber Choir’ – an elite group of singers which she has occasionally conducted in the past. She has also sung with ‘Anthology of Song’ in a solo capacity and as part of a vocal quartet. She is part of the ‘Ricardus Consort’ who occasionally perform recitals mainly consisting of Renaissance music. 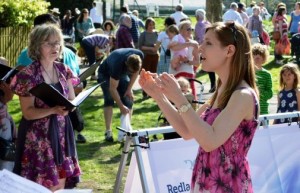 Emma is married to jazz musician Mark Trounson, for more information about Mark, please visit marktrounson.com. They enjoying occasionally performing together, most notably as regular guests for BabyGigs concerts with their Voice and Double Bass jazz duo ‘The Trounsons’. In her spare time, Emma enjoys watching rugby union with her family – she has a season ticket for Leicester Tigers. She enjoys dancing, walking and going to concerts, operas, musicals and the theatre. Emma is a member of ISM and of the Association of British Choral Directors. Emma volunteered as a board member (Musical Director) of Leicestershire-based community interest company: ‘Applause’ which raised money for local Leicestershire charities and was Musical Director for various shows such as ‘Happy & Glorious’ (Curve Theatre 2nd Oct 2016) and Radio Leicester’s 50th Anniversary Celebration (De Montfort Hall 8th Nov 2017).